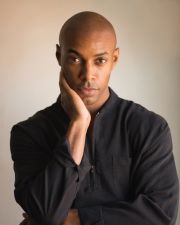 Casey Gerald is the author of There Will Be No Miracles Here. After a Yale football scholarship jumpstarted Casey Gerald’s educational career, he spent the next decade achieving countless hallmarks of success, from graduating from Harvard Business School and starting an acclaimed non-profit to having dinner with a former president and speaking at TED. But he soon discovered that there was a dark side to living out the narrative of the American Dream. His forthcoming memoir, There Will Be No Miracles Here, chronicles his reckoning with our nation’s most cherished myths. In his electrifying speeches, he turns preconceived beliefs upside down and inspires audiences to question the meaning of success.

Casey Gerald was the poster child for the American Dream, escaping a harrowing childhood to enter a new world of elite universities and secret societies. But as he climbed the social ladder, he saw how this hierarchy stifled those at the margins, and that “salvation stories” like his could be used to keep others from rising. Now, he uses his platform to splinter the myth of the American Dream, illuminate inequality, and set forth a bold new direction for a generation navigating a fractured nation.

In his talks, Gerald shares his powerful coming-of-age story, one that straddles the complex intersection of race, class, religion, queer sexuality, and masculinity.  He explores the essential questions of our current moment: how do we succeed in a culture that is designed to silence us? How do we heal from trauma while retaining our identity? His talks are as a testament that every person deserves to define and hold on to their humanity, especially during times of collective anger and growing disillusionment.

Gerald’s new book, There Will Be No Miracles Here (October 2018), is a meditative memoir turned incisive manifesto. In his singular coming-of-age story, he shares his journey on the rise to success, his disenchantment with society’s definition of achievement, and his painful realization of how his own ascension fits into a larger scheme. Instead of becoming complicit in the American narrative that narrows lives down to stereotypes of success and failure, he suggests how we might build a new foundation to sustain the richness of our differences.

A native Texan, Gerald attended Yale University and Harvard Business School, where he delivered a stirring pre-commencement speech urging his classmates to value purpose over profit. He started an acclaimed non-profit, MBAs Across America, after beginning his career in economic policy and strategy.  An electrifying speaker, Gerald’s TED talk on the “Gospel of Doubt” has received over 1.8 million views, and he opened for President Barack Obama at SXSW. He has been featured on MSNBC, in The New York Times, Financial Times, The Guardian, and on the cover of Fast Company, which named him one of the “Most Creative People in Business.”