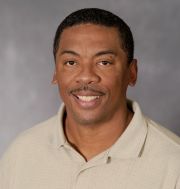 Dennis Powell lives in Upland, California with his wife of 28 years, Brenda and he is a father of four. Dennis started his career with the Los Angeles Dodgers in 1983-87. He will be sharing the story of his career and what inspired him to success.

Dennis was 9-0, with a 2.74 ERA record for the Albuquerque Dukes before being promoted to the parent Dodgers on July 7, 1985. In 1987, Dennis was traded to the Seattle Mariner where he played until 1990-93. Dennis also played in the Milwaukee Brewers, Chicago White Sox and Baltimore Orioles organizations. Before retiring in 1997, Dennis had made pitching stops internationally in Osaka, Japan, Dominican Republic, Cartagena Colombia, Venezuela and Mexico.

It is also worth noting that Dennis has a U. S. Street named in his hometown of Norman Park, Georgia; Dennis Powell Lane. Dennis shares a MLB record with two other players where all of his pro hits were nothing but doubles.